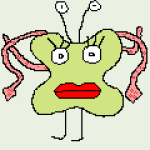 **This is a featured review which was first published March 2, 2016 on livinginlekki.**

Our waka about led us to this week’s discovery, a new spot that just opened a month ago in Lekki phase 1.

The first time we noticed the new spot was when they put out a teaser banner about replacing the rooftop bar at centro mall last year.

We waited patiently as they set up and finally opened up this year, the new spot is an American barbecue grill which is a bit similar to the bar they replaced ‘The orchard’

Last weekend, we checked out the new restaurant for sunday lunch American grill style. See what we had for lunch, Bbq steak on a side bbq beans & potato salad.

If you ever went to Centro mall when ‘The orchard’ was at the rooftop you will almost not recognize the indoor space where Denise renee is utilizing. The deco is so simple and calm. It will definitely remind you of New York and make you feel like you are not in Lagos 🙂 They have a really nice wallpaper of NY view in their semi cozy lounge.

The outdoor space is just like any other rooftop bar around.

Placing an order was a bit difficult because the waitress couldn’t really help, she did not know what they had. We had to request for the manager to understand what they had available based on their menu. The menu definitely looked affordable with combos (1 side, 2 or more). Also we noticed they had side options a bit different from most places.

We eventually ordered steak even though it wasn’t on the menu, they offered to make that with the combo meal at the same price. Ordered medium rare steak with recommendations from the chef about the bbq beans and their potato salad. We were a bit curious about the bbq beans which was new one for us.

When served presentation was just alright, the portion was just fine for a grill house, the bbq beans was interesting. It was baked beans with minced meat, bbq sauce and veggies. It was actually very nice, the potato salad was just alright. The steak was well done and well seasoned. The meal was filling for us but might not be the same for others based on what you order. They had 2 beef combo’s and more. We would definitely love to try their chicken combo and compare with other places around.

What we had & Where